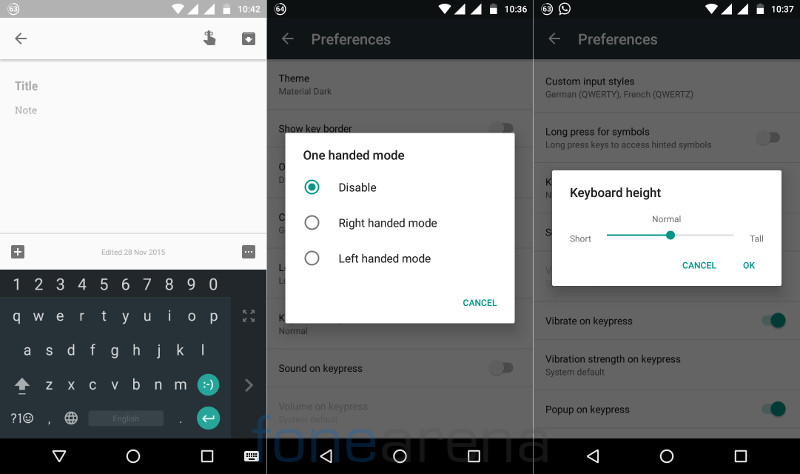 Google Keyboard has received a major update with new features and improvements. The update that bumps the app to V5.0 brings one-handed mode, new gestures, UI tweaks and more.

First up, the update brings one-handed texting feature that allows users to change the orientation of the keyboard to left or hand right as per their choice. In order to activate one-handed mode, you will have to press and hold on the “,” key and then tap on the one-handed icon. Tapping on the icon shrinks your keyboard and makes it easy to shift to either left or right side. This feature is especially useful for smartphones with larger screens as it allows easier thumb reachability.

Moving on, you can now select the height of the keyboard with five different choices ranging from short to tall, “normal” being the middle point between them. There is an addition of an emoji shortcut to the right side of the spacebar as well. In case of gesture control, you can just tap and hold on the spacebar and move left or right to move the cursor around quickly. Moreover, holding down on the delete key and then swiping to the left will let you delete multiple words at a time. You can also long-press a quick suggestion to “trash” it.

Google Keyboard update is gradually rolling out to Android users.