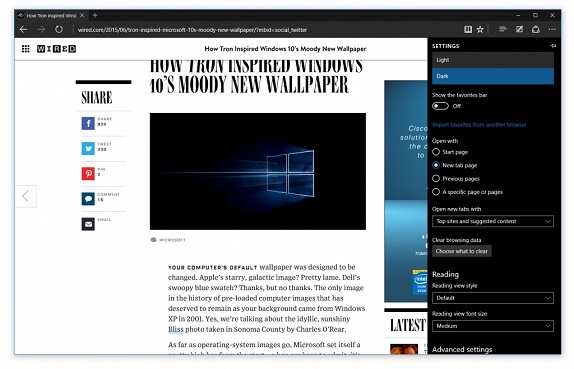 The new Microsoft browser that replaces Internet Explorer finally shows off the new Edge branding ahead of its public launch with Windows 10.  Edge now has a black theme that matches the Windows 10 taskbar, along with new menus for sharing content. Users can also customize Edge’s New Tab page to display only their most visited sites, or their most visited sites along with suggested content that may interest them.

There are general UX improvements in this build like using the Start Menu, you can swipe up on the left side to open All apps. The Taskbar will show a notification in orange when an app needs your attention. You can download something or move files around in File Explorer, the progress animation in the Taskbar has been changed back to green and back to animating horizontally. The Cortana Office 365 integration is also added to this latest build. The latest build is now rolling out to Windows Insider members on the Fast update ring.