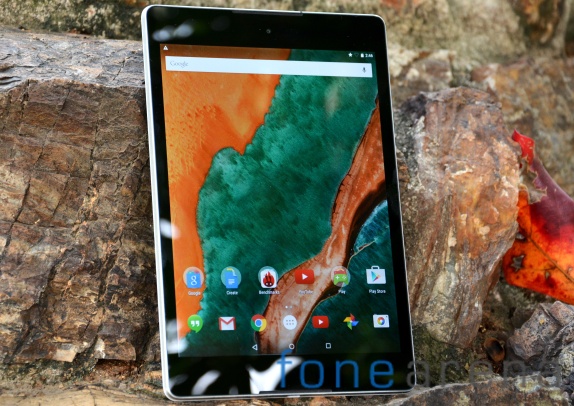 After more than five years, HTC is back in the roster to build a Nexus device. The Taiwan manufacturer has taken over from ASUS and Samsung to produce the Google Nexus 9.

The latest iterations of Nexus devices show the shift in Google’s strategy. While the Nexus series in the past came with an affordable price tag, the new ones – HTC Nexus 9 and Motorola Nexus 6 make no compromises and cost you a premium. We have spent high quality time analysing the slate and here’s our detailed review.

HTC Nexus 9 comes in a standard retail box with a large number 9 sign on the front. Opening the package, you will find the tablet itself along with a micro USB cable, A/C charger and as usual some leaflets.

In some global markets, the retail box also includes a magnetic cover and a keyboard folio. The accessories feel premium and will certainly help the productivity of the tablet.

We had already unboxed the Google Nexus 9 and in case you missed it earlier, you can check out the video below.

Google Nexus 9 replaces the Nexus 7 and the design, build quality have taken up a notch. The differentiating factor of the slate from the previous model is its metal frame – which of course is the latest trend in the market.

The newest Nexus tablet makes no compromises and doesn’t cut any corners like the earlier ones. So, the building materials used in the construction of the Nexus 9 are of high quality, thus giving it a premium aura.

Metal frame not only makes the slate look elegant, but it also provides rigidity and in turn helps HTC manufacture a high-quality mobile device. There’s only one word to describe the design and the build of the Nexus 9 – stellar. 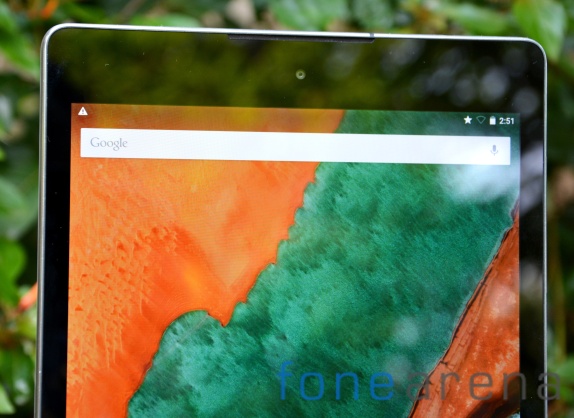 Google Nexus 9 comes with an all-black front and the rear features a large ‘Nexus’ branding. The front is covered by the Gorilla Glass 3 and the back features a soft-touch plastic that was first seen on the Nexus 7 (2013). The tablet is available in three paint jobs – black, white and sand. We never like flashy hues, so we bought the all the time classic color option – white. 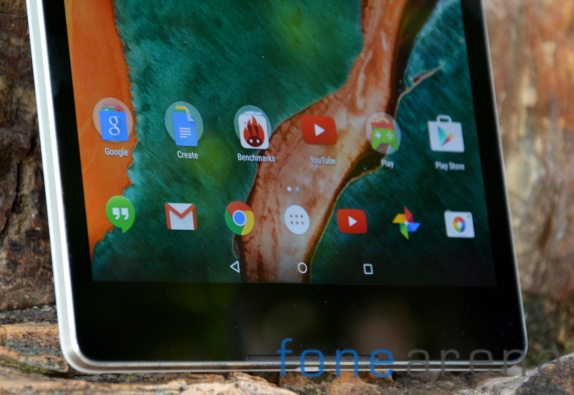 On the front, there’s an 8.9-inch display and above it in portrait mode, you get to see the 1.6 megapixel front facing camera. There are two BoomSound stereo speakers which are located on the top and bottom of the display. 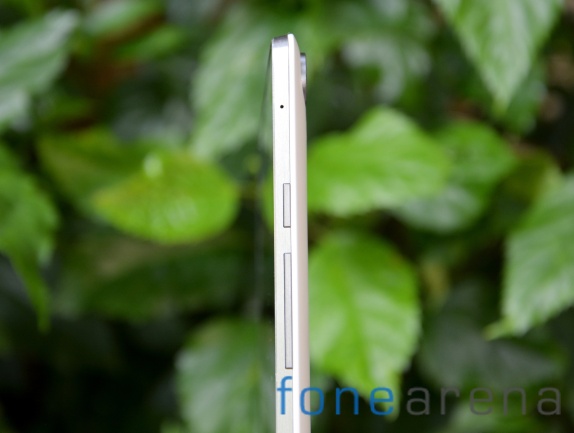 The power key and the volume rockers along with a secondary microphone pinhole are on the right side. The left side of the tablet is completely bare. 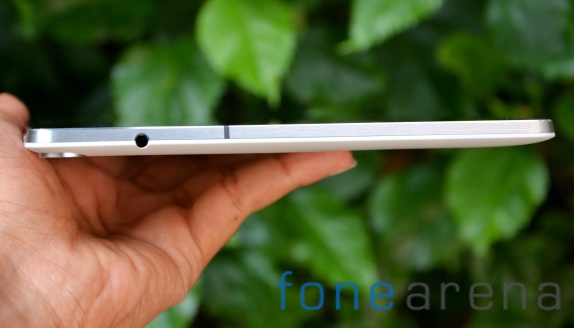 Moving on to the top, you can find the 3.5mm audio jack towards the right end. You can also find the plastic trimming on the top and this is essentially needed for the internal antennas to pick up the signal. 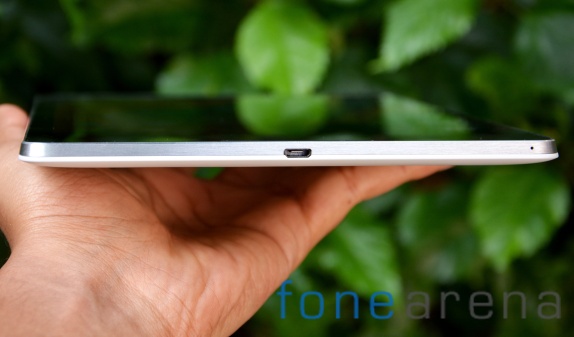 The bottom of the Google Nexus 9 houses the microUSB port and a primary microphone pinhole. 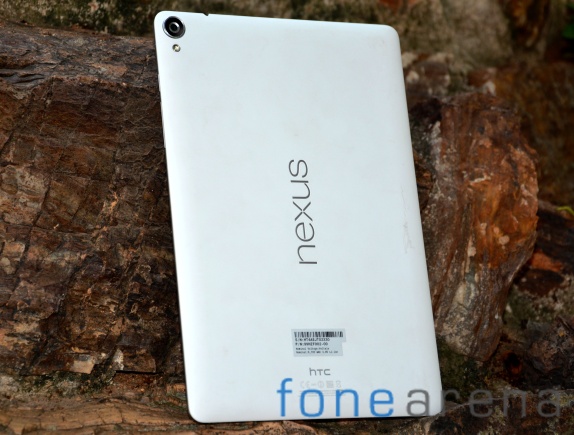 On the back, there’s an 8 megapixel main camera and it is equipped with a single LED flash on the top left corner. The Nexus branding is bang in the centre while the HTC logo can be seen at the bottom. The back panel is non-removable and so is the battery.

HTC Nexus 9 sports an 8.9-inch IPS LCD display with a resolution of 2048 x 1536 pixels. The slate has an aspect ratio of 4:3, thus directly competing with Apple’s iPad series.

The display on the Nexus 9 accounts to a pixel density of 281ppi and is sharper than the iPad Air 2’s Retina display. 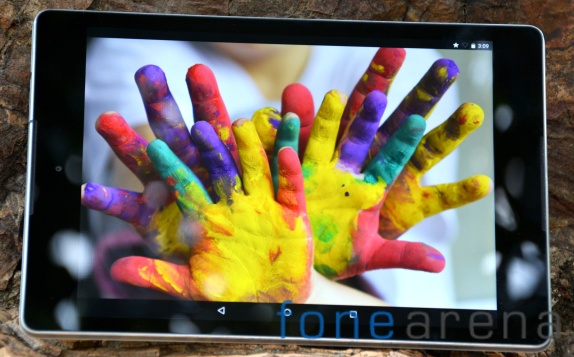 The colors are found natural on the screen and the viewing angles are great. The contrast is also impressive, but fails to match the AMOLED standards. Overall, the performance is as expected from an IPS panel.

The Gorilla Glass covered Nexus 9 display is a reflective mirror. Even with the screen turned on, you can pretty much see yourself on the tablet, which is quite annoying at times.

Google Nexus series is not exactly known for is hardware, but more so for its software and Nexus 9 isn’t any different. It is the first tablet to run on the latest Android 5.0 Lollipop operating system. In case you were wondering, the newest Android build brings material design and a new ART runtime. 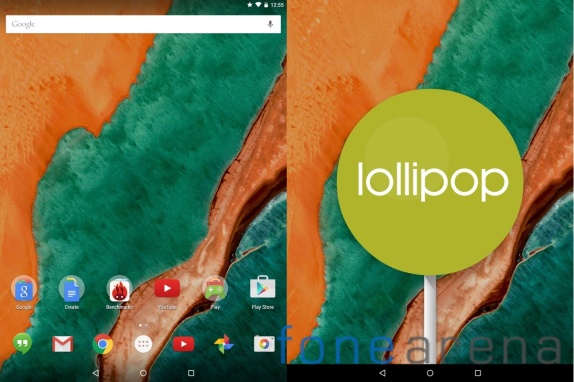 For starters, the home screen on Android 5.0 Lollipop has a new app arrangement. Out of the box, you will find three folders with each of them containing grouped Google applications. The app drawer too has seen a redesign – nothing major though. It now appears in a window with white background. 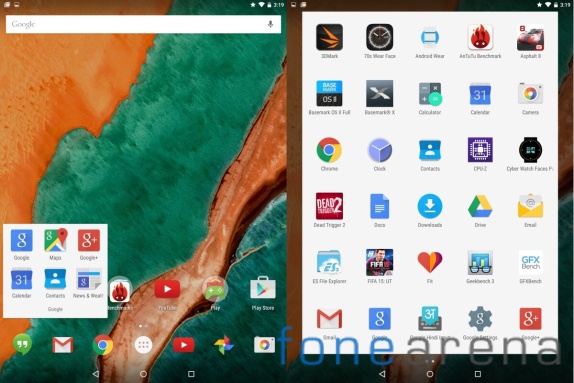 The app switcher now has a new interface and it allows you to easily select the application you need. Furthermore, you can close apps by tapping on the dedicated close button on the top right corner or by swiping the card to left or right. 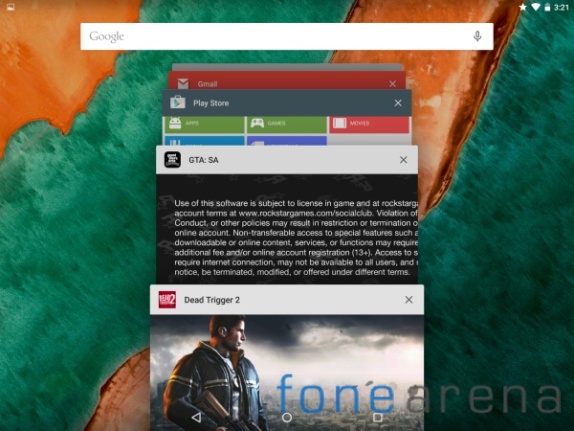 Google recently launched its fitness platform – Fit and of course it’s on board Nexus 9. The app synchronizes with Android Wear and other compatible devices. Using the app, you can record activities, set goals and keep track of your progress. Google Fit also has the ability to send you notifications and reminders to keep you motivated. 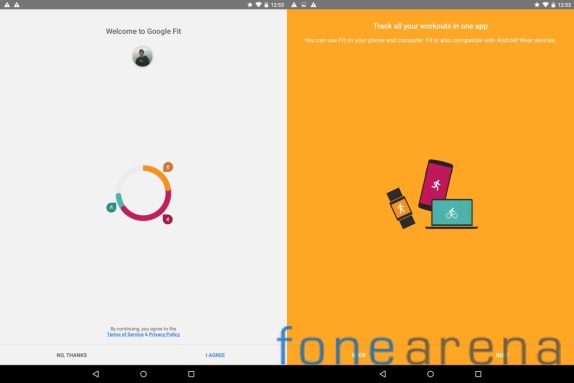 It doesn’t require a genius to guess that Google Chrome is the default browser in the Nexus 9. The browser synchronizes with your desktop and mobile versions by just using your Google account. So, what does this mean? Well, you can open a web page in your PC and finish reading it on your tablet. You can also reduce your data usage by compressing the webpage by using specific settings. 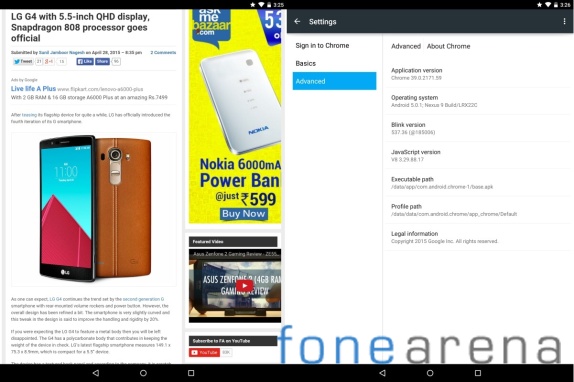 There are some minor changes to the notification area, home screen customization options and contacts manager in Android 5.0 Lollipop OS.

The unit we have is the 32GB variant out of which you can utilize about 25GB. And, at the time of boot, there’s about 800MB of free RAM available.

HTC Nexus 9 is powered by a 64-bit Nvidia Tegra K1 chipset with a dual-core Denver CPU clocked at 2.3GHz, Kepler DX1 GPU and 2GB of RAM. This particular hardware configuration is definitely one of the best available for an Android tablet.

You can check out our Google Nexus 9 gaming review to know how the tablet performs in real time. Continue reading this section for a closer look at Nexus 9’s performance.

We ran some popular benchmarking tests on the tablet to stack it up against its competition. In the meantime, if you are wondering about mobile device benchmarking, then do check our feature story to know more about it.

The Nexus 9 enters the battle ring with the AnTuTu test, which gauges the overall performance of the slate. With a score of 38,502 points, Google’s latest Nexus tablet manages to grab the third spot in our chart. 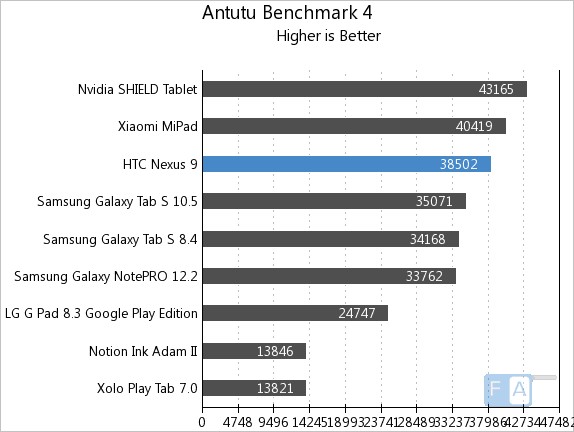 Next up was the Linkpack test measuring the multi-threaded benchmarking of the tablet. Again, the device was seen among the top performers. 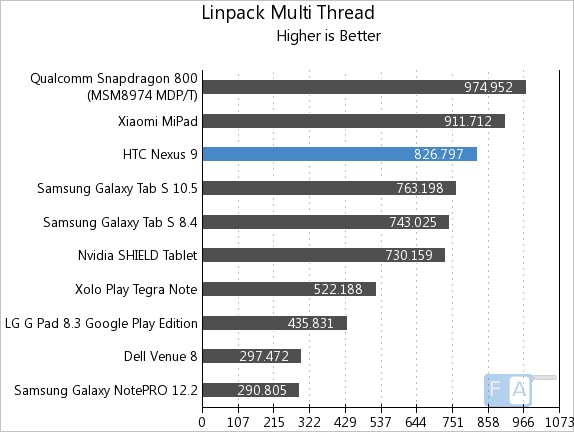 We then had the Nexus 9’s GPU sweating it out. The GFX benchmarking test reveals that the tablet is one of the best in its class. 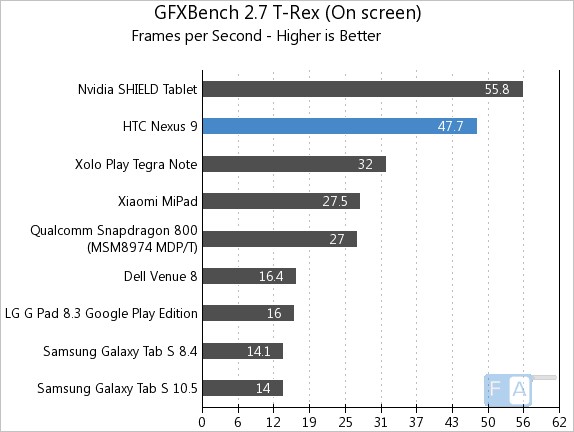 Lastly, the Vellamo benchmarking application helped us test the browsing performance of the slate. Our chart suggests that the Chrome browser on the Nexus 9 is surely one of the best and is capable of offering rich experience. 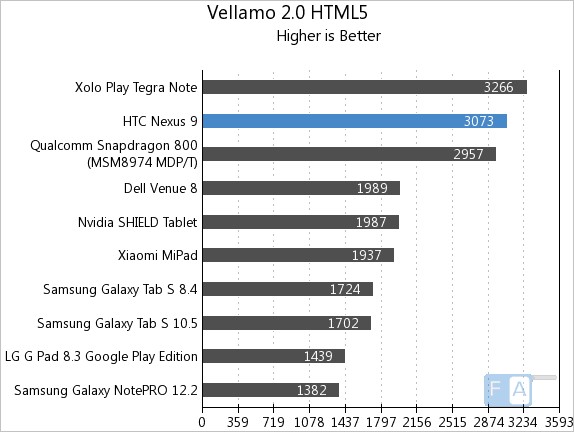 Google is packing the Nexus 9 with an 8 megapixel f/2.4 primary camera with a single LED flash. On the front there’s a 1.6 megapixel secondary camera.

Talking about the camera user interface, it is quite simple and navigation is hassle free. The shutter button is on the right side and options like timer, flash settings, grid view and the front facing camera switch are hidden under a menu available in the top right corner. 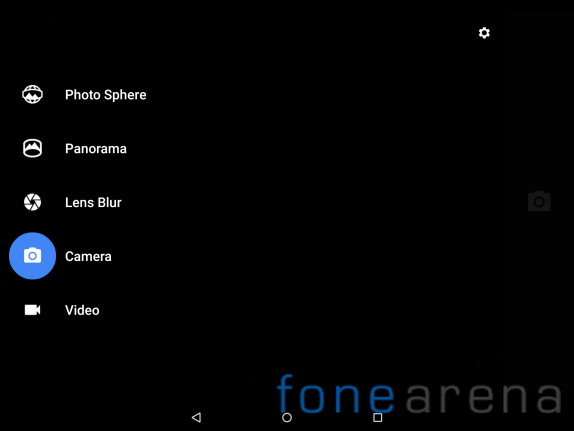 The advanced shooting options like the regular shots, panorama, lens blur, photo sphere and video are all located on the left side. The camera settings menu has options for you to set image exposure manually and you can also tweak with the image resolution. 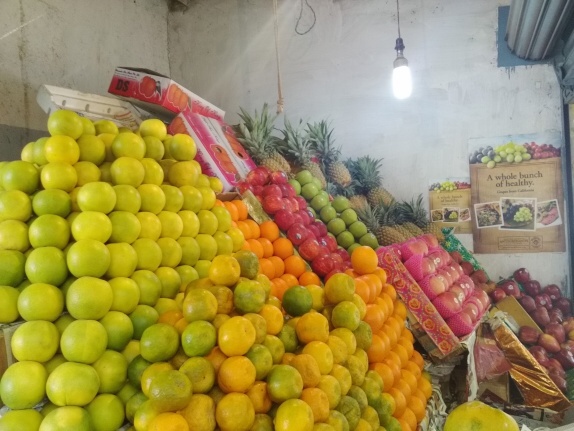 The image quality produced by the Nexus 9’s camera is quite surprising and in fact it’s better than most of the tablets. The colors are accurate, contrast is good and the detailing is nice. However, the noise levels are on the higher end and the dynamic range isn’t the best.

All in all, the images captured by the Nexus 9’s camera is definitely better than most of the tablets out there. If you are a casual photographer you will be satisfied with Nexus 9’s camera.

HTC Nexus 9 also has the ability to record videos at 1080 pixels, but you can downsize the videos to 720 pixels. The clips captured using the tablet’s shooter offers good colors and again there’s plenty of detail. Dynamic range is poor and the contrast could have easily been better, but we are just nit picking.

The Google Nexus 9 supports a wide range of connectivity options. The tablet has an optional quad-band GSM, CDMA, penta-band HSPA and 4G LTE.

Nexus 9 also comes with Wi-Fi a/b/g/n/ac, Bluetooth 4.1 with aptX, A-GPS, GLONASS and microUSB 2.0 on board. And with the slate running Android 5.0 Lollipop, you can also cast your Nexus 9’s screen on a compatible device.

HTC’s newest tablet packs a monstrous 6,700mAh battery. The slate according to the company offers up to 30 days of 3G stand by time and we are happy to confirm that it is indeed true. 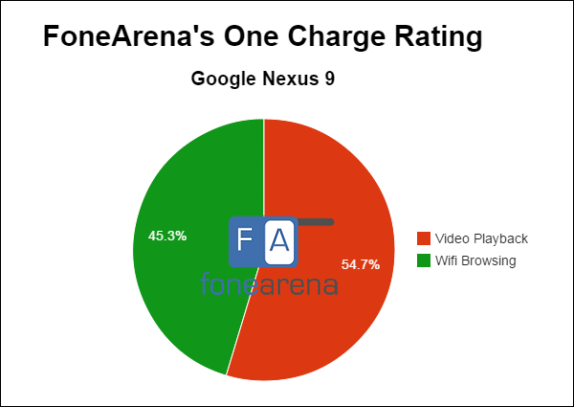 We obviously gave the Nexus 9 our own battery test treatment and the slate managed to stay alive for more than 10 hours on Wi-Fi web browsing. Google Nexus 9 lasts for about 12 hours and 30 minutes on video playback which is commendable.

The Nexus 9 is equipped with a battery saver mode to help you save some juice when the device is not in use. The software trick slows down the processors, restricts background data and reduces the performance of the tablet.

As we have already told you, the Nexus 9 makes no compromises. The combination of neat design and great build quality makes it one of the best tablets out there. Google’s slate has the right character to rub its shoulders against Apple’s iPad.

The display on the Nexus 9 is quite reflective, but apart from that there’s absolutely no concern with it. The high-end hardware on the Nexus 9 ensures smooth performance and the Tegra K1 chipset lives up to its expectations. 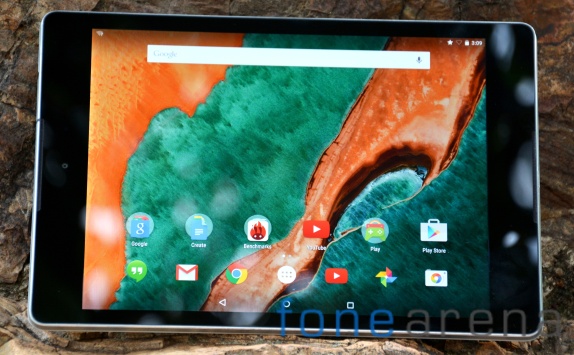 The placement of the BoomSound stereo speakers is just perfect and it also enhances the experience of viewing multimedia content.

Android 5.0 Lollipop with a new material design and ART runtime complements the powerful hardware on the Nexus 9. The OS is fluid and the device runs very smoothly with no shuttering whatsoever. Overall, we quite liked the Lollipop experience.

Lack of memory could be the only concern with the Nexus 9. This is applicable if you are picking the 16GB variant. We have 32GB version with us, so we didn’t feel the heat.

The HTC built Google Nexus 9 is surely one of the best Android tablets out there. If you are looking to buy a tablet, then we would definitely recommend the Nexus 9. Pick the 32GB variant though. Also, if you are out there planning to pick an iPad, you might really want to reconsider your decision.