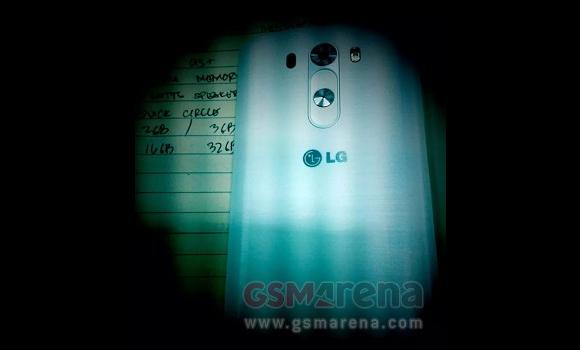 Specifications of the LG G3 had leaked several times, but we did not see a render of the G3 yet. GSMArena has got hold of a live image of the upcoming LG flagship that reveals the rear-mounted power button and the volume rocker. The design of these keys are a bit different from the LG G2, G2 mini or other latest G series devices. It also has a new sensor next to the camera, which could be the rumored fingerprint sensor.

According to earlier rumors the LG G3 would come with a Qualcomm Snapdragon MSM8974 processor (Snapdragon 800 or 801 SoC), 13-megapixel rear camera with OIS+, 2.1-megapixel front-facing camera, 3GB DDR3 RAM, 32GB of internal memory, expandable memory up to 64GB with microSD and 4G LTE. It is also expected to run on the latest Android 4.4.2 (KitKat) with a new flat UI. The new leak also reveals that it would come in 16GB version as well.

The LG G3 would also come in Gold colored variant and is expected to be unveiled sometime in Q2 or by June 2014. LG is also expected to launch the LG G3 mini later this year.