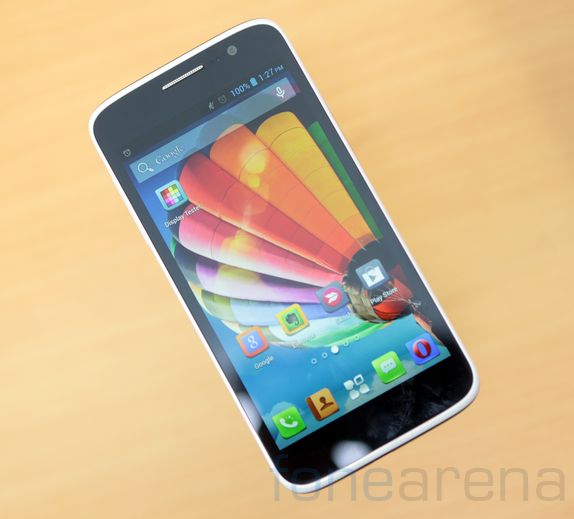 Unlike most phones in its price range, the Spice Pinnacle Stylus feels quite solid despite an a plastic dominated build. The phone definitely feels quite huge and that is mainly because of its 5.5inch display. Though it feels quite solid to hold, it tends to be on the heavier side for most people. 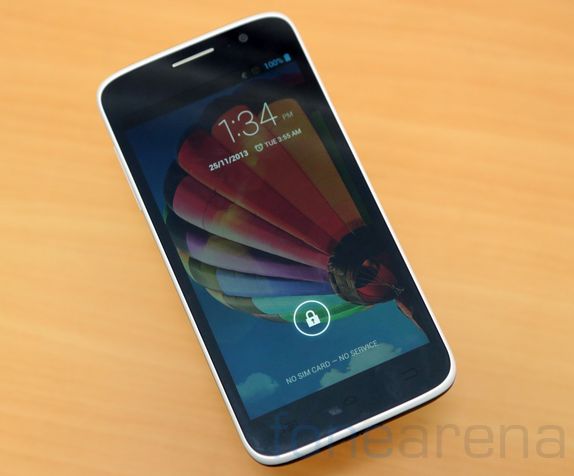 On the front of the phone, we have the 5.5inch display and it is flanked by huge bezels on the top and bottom. The sides bezels are thick as well and that accounts for the huge footprint of the Spice Pinnacle Stylus. Above the display, we have the earpiece. On the right side of the earpiece, we have the ambient and proximity sensors to the right of which we have the 2MP front facing camera. 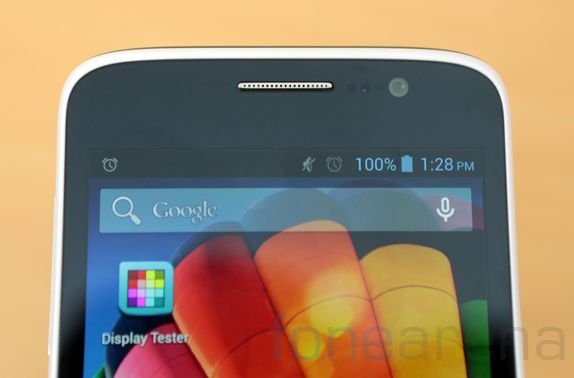 Below the display, we have the usual set of capacitive touch keys that are not visible unless when pressed. The backlit keys are a good touch and gives the device a premium look. 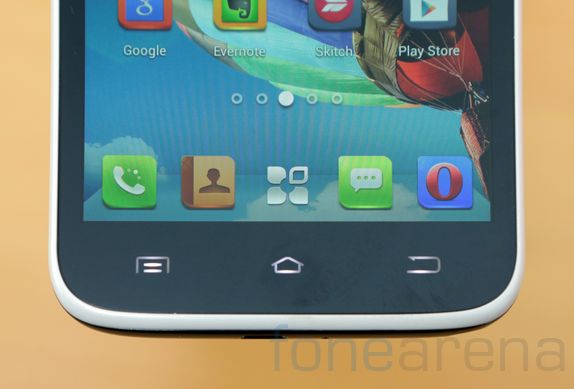 There is a plastic frame that surrounds the display and gives the two color texture for the phone. There is a metal rim that runs across the entire device and it is because of this metal rim that the device feels solid and heavy.

On the right side of the phone, we have the power lock button.

On the bottom, there is a microUSB port, a microphone hole and the stylus compartment. All these are present on the metal rim. The microUSB port is sort of placed deep inside and hence charging the phone and connecting it with a microUSB port(other than the one given in the box) can be tricky at times.

On the left side, we have the volume rocker.

There is nothing on the top except the 3.5mm audio jack on the metal rim part. 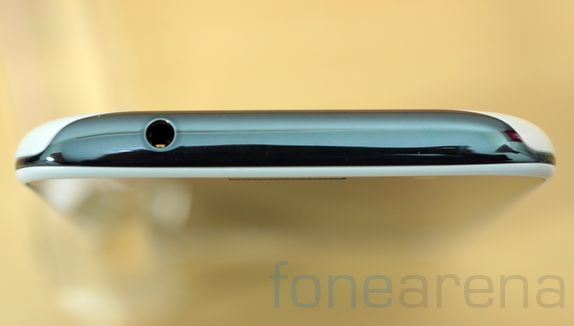 Moving to the back of the phone, we find the same plastic material that was found on the front rim. The pearly white glossy back hits the sweet spot of being glossy and not being fingerprint and scratch prone. There is a 8MP camera at the top center with a dual-LED flash on its right side. There is a speaker grill on the bottom left side close to the Stylus compartment. 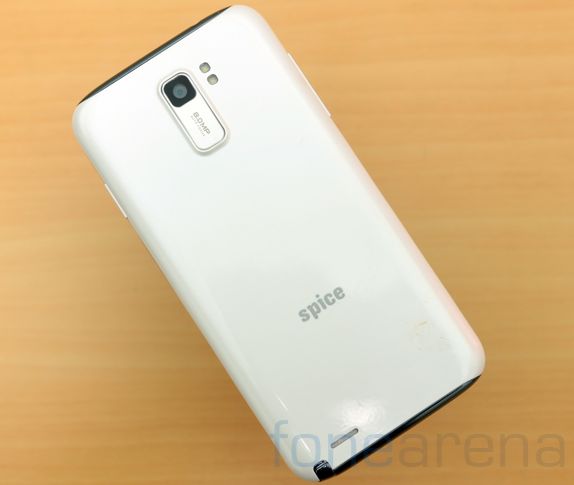 Spice Pinnacle Stylus has a removable back cover and on removing the plastic cover, we see the 2500mAh user replaceable battery along with two SIM card slots and a microSD card slot. The plastic cover feels solid and doesn’t flex much like the Samsung back covers. 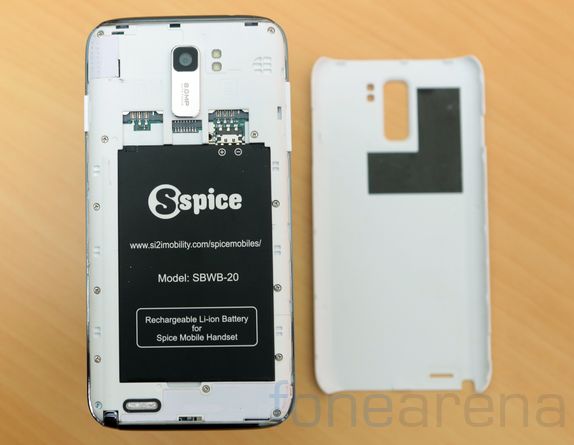 Overall, the design language followed is nothing new, but that is not necessarily bad. It is simple and gets the job done most of the times. In terms of build quality, the phone is extremely solid and feels quite dense. Handling is one of the weak points of Spice Pinnacle Stylus. The solid body comes at a price of heaviness and that compromises the handling. In addition to its huge size, the weight adds a lot of problems and one handed usage becomes a big ask even for people with big hands. 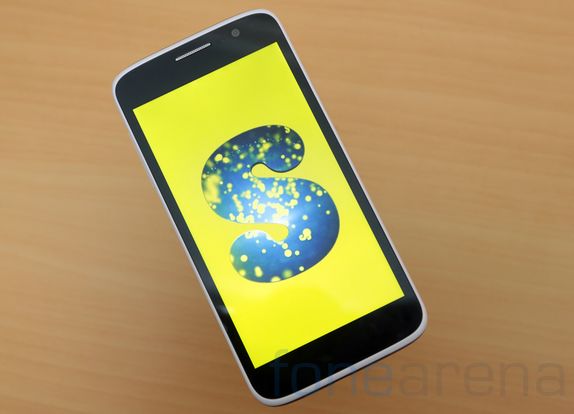 Spice Pinnacle Stylus comes with a 5.5inch HD display with a pixel density of 287ppi(exactly the same as Samsung Galaxy Note 2). The display is a 5 point multi-touch display and it is super sensitive. It even works quite well with the Stylus. 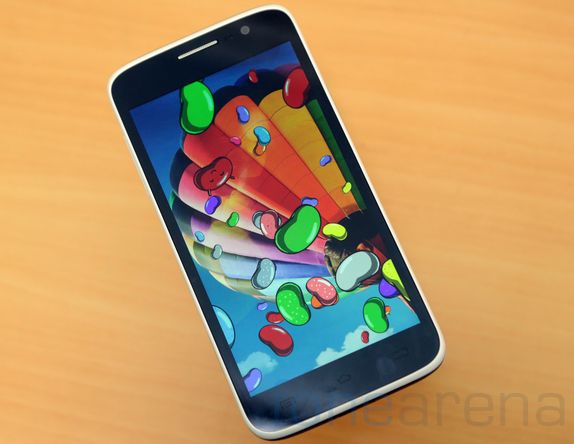 The display is quite good when looked head on. The brightness levels are quite good. The contrast is pretty good, but not comparable to the SuperAMOLED displays. Viewing angles are one of the weak points of the phone.

Overall, the display is above average if you spare the poor viewing angles.

Like most of the phablets in its budget range, the Spice Pinnacle Stylus is powered by the same and repetitive MediaTek MT6589 quad-core SoC clocked at 1.2GHz. There is 1GB RAM and PowerVR SGX544 GPU to handle the graphics tasks. 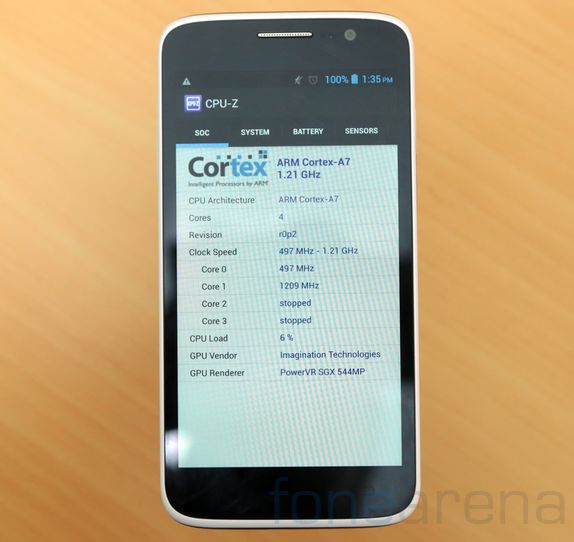 Surprisingly, out of the 1GB RAM, around 970MB is available for use and when the device is idle, around 610MB is free. 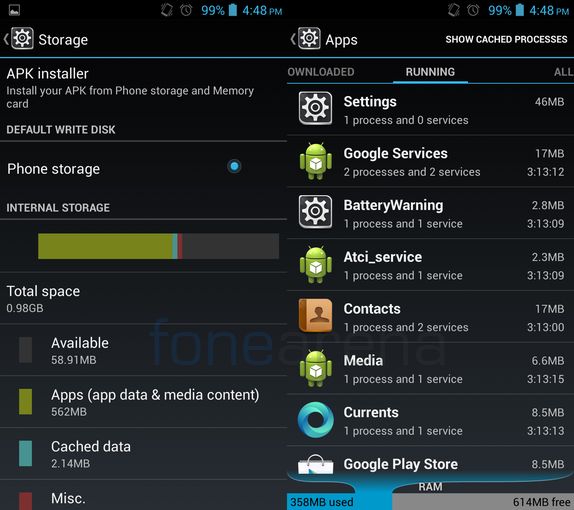 In terms of performance, the phone is fast most of the times. However, there are some software glitches and occasional jitters. The touch screen response can be delayed at times, but that is something you have to live with. Switching between the apps is fast and for most of the average daily use, the phone is quite good.

Gaming is good on the device as there are sufficient details and the games come out decently.

Spice Pinnacle Stylus has a 8MP camera at the back along with dual-LED flash and a 2MP front facing camera. Both the front and rear camera can record Full HD 1080p videos which is a big surprise. 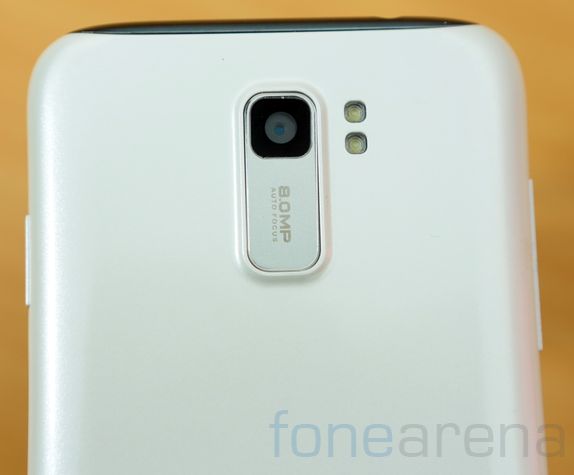 In terms of UI, the Spice Pinnacle Stylus comes with the same MediaTek camera application that is found in many of the MediaTek powered phones these days. On the left, we have the various shooting modes that include – normal, HDR, Face Beauty, Panorama, Multi Angle Panorama, best scene mode, smile detection, best shot mode and EV bracket mode. On the right side, there is a flash toggle button below which we have separate shutter buttons for photos and videos. Below the shutter keys, we have the settings option. There is a shortcut to gallery on the top of shutter keys which can also be opened by swiping from right to left. 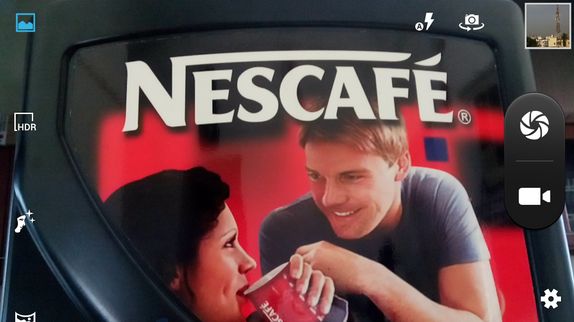 In terms of camera performance, the image quality isn’t the best, but it is definitely good considering the price range and other features that the phone offers. Touch to focus seems to be a problem. You can check out the camera samples right below.

There is a built in HDR mode in the camera app and it does its job to a little extent as you can see from the HDR samples below.

Both the front and rear cameras can record Full HD 1080p videos and you can check out the sample right below. 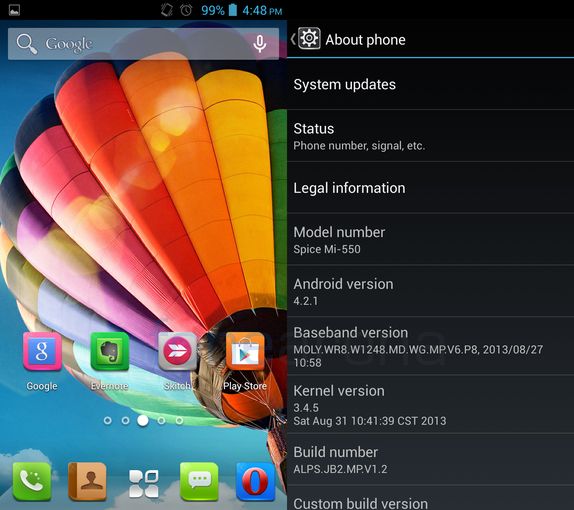 The UI is very similar to the stock UI, but almost all the icons have been changed giving it a different feel. 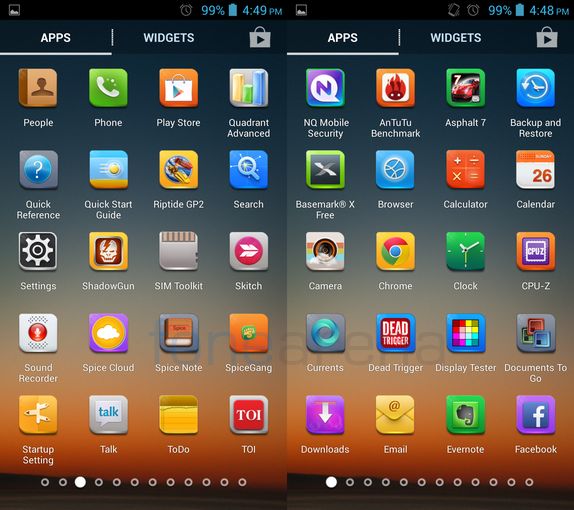 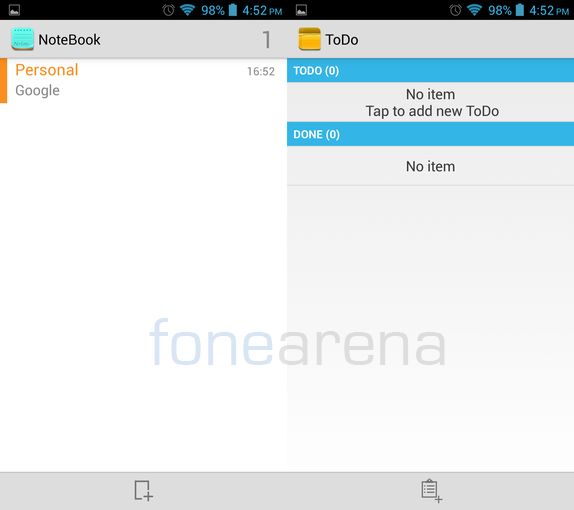 Since the phone runs on Android 4.2.1 Jellybean, there is a quick toggles option in the notification bar and it contains 12 toggles. Being a dual SIM phone, there are options to select default SIM card for tasks like messaging , calls and data connectivity. The Music player is quite minimal and has a tabbed interface. The video player is capable of playing 1080p videos. 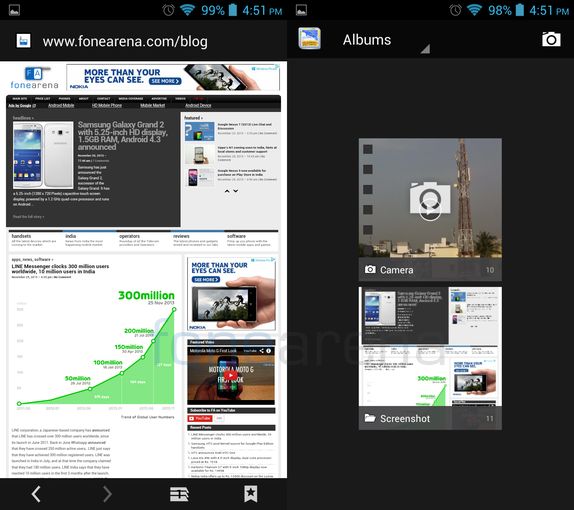 Spice Pinnacle Stylus also comes with a one year subscription to Evernote and Skitch Premium features.

Spice Pinnacle Stylus, as the name suggests, comes with a Stylus and a Spice Note App to assist note taking. 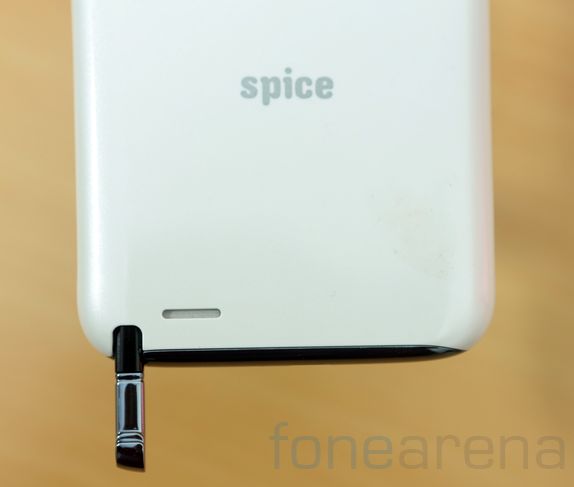 The Stylus that comes with the Spice Mi-550 has a big rounded tip and is not the smoothest we have seen. When using the stylus to take notes in the Spice Note app, sometimes the touch seems to be not registered and using the app isn’t that easy. The app is slow and late to respond to touches. But because of the sensitive touch screen, the stylus works pretty well when you are navigating through the UI. 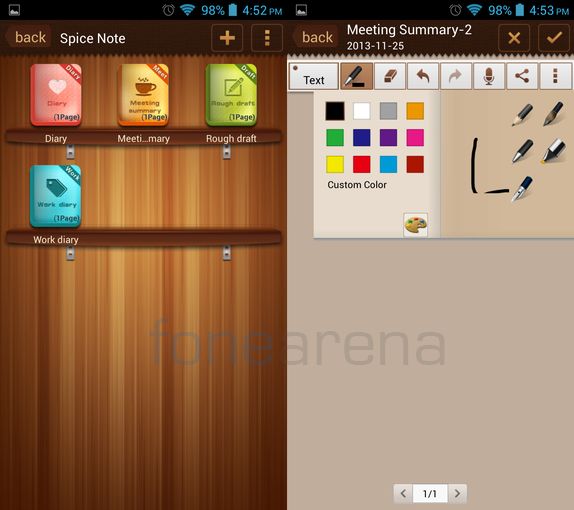 Spice Pinnacle Stylus comes with a 2500mAh user removable Li-ion battery. In terms of battery life, we have had mixed results – sometimes the battery performance was quite good as it lasted one solid day with heavy usage, but then it wasn’t even able to last one night when we switched it off at about 90%. But for most times, the battery life was quite good. 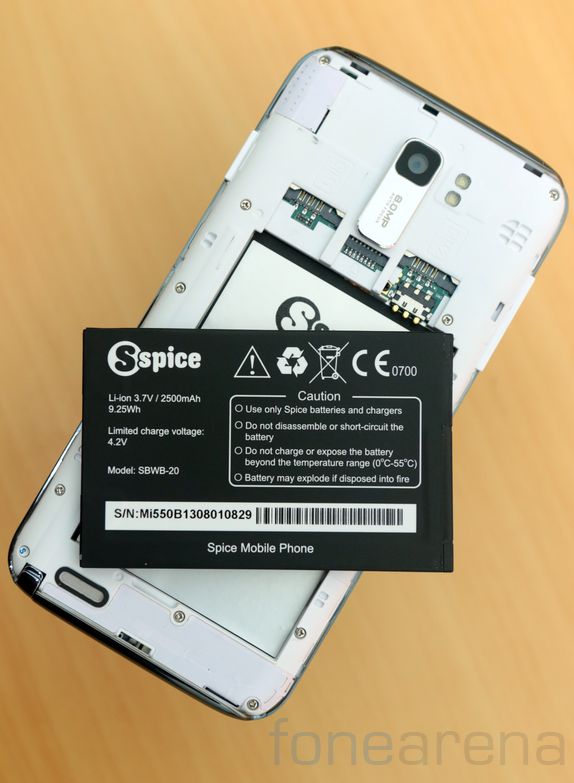 Spice Pinnacle Stylus is a typical mid-range phablet in the Indian market, but comes with a slightly bigger display and a stylus(the use of which seems to be a mystery). But when you consider its price of Rs. 15,000, its advantages definitely seem to outweigh its disadvantages. If you are looking for similar phones, then the Micromax Canvas Doodle 2 is one option. 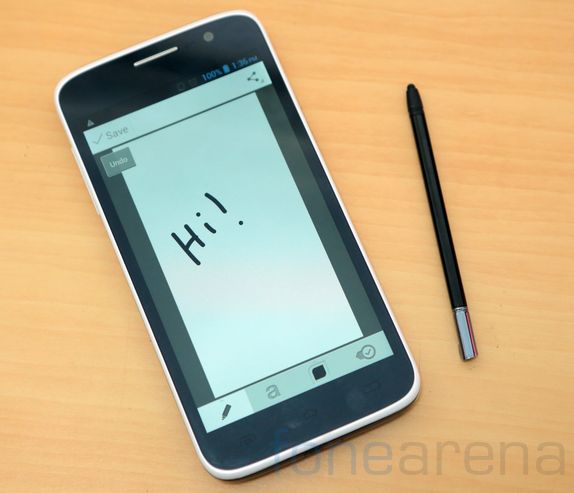