Although we live in the world dominated with touch screen devices, when it comes to getting productive work done we do rely on a physical keyboard, and it’s even better if the keyboard is wireless. A Bluetooth keyboard lets you connect with mobile devices like smartphones, tablet, laptops and even desktops. We have got our hands on Logitech’s K380 multi-device Bluetooth keyboard. Let’s see how the keyboard fares in terms of design and offering productivity in this review. 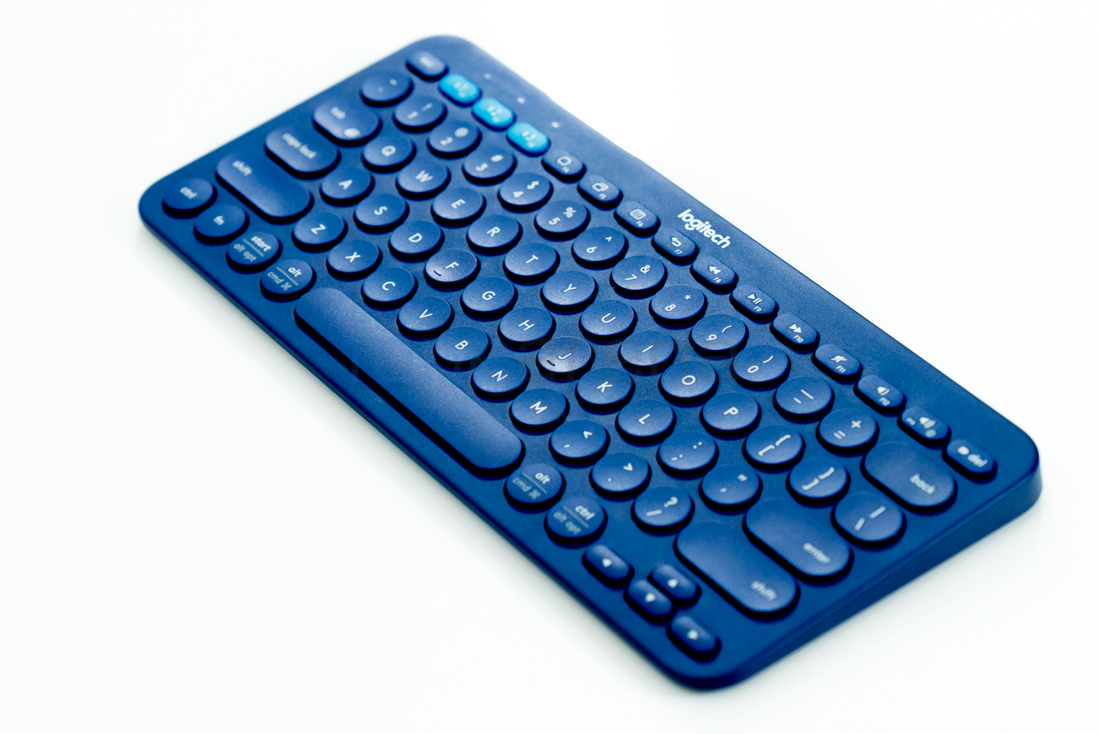 The first thing you will notice about the K380 keyboard is its design, which is compact and stylish at the same time. What sets the keyboard apart from the usual lot, is the size and shape of the keys which are circular instead of the usual chiclet style that are square in shape with rounded edges. The keys are well spaced but one might need sometime to get used to the circular keys as it feels a bit different. 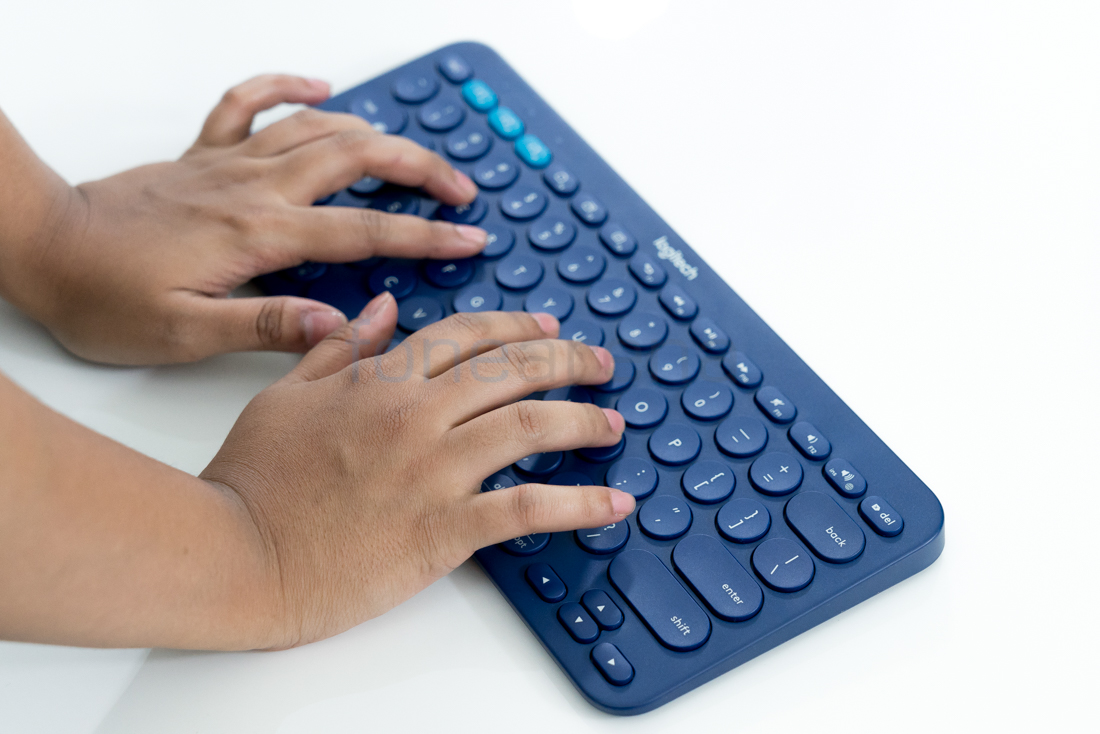 The keyboard is lightweight and measures 10.9 x 4.9 x 0.6 (W x H x D) inches. It is really portable and easy to carry around. The Logitech branding is present at the center.

The power button is present on the left side of the keyboard followed by LED indicator. You will have to toggle it in order to turn it on and off. Even though the keyboard is made of plastic, it is well-built and does not feel cheap.

The main feature of the keyboard is its multi device support. You can switch easily from one device to another by simply pressing the three Bluetooth buttons that are light blue in color. All other usual function keys are present on the top along with volume and music control. However the keyboard doesn’t have the home and end keys.

The alt and control keys are also present next to the arrow keys which I feel are too small in size and are cramped up as well. 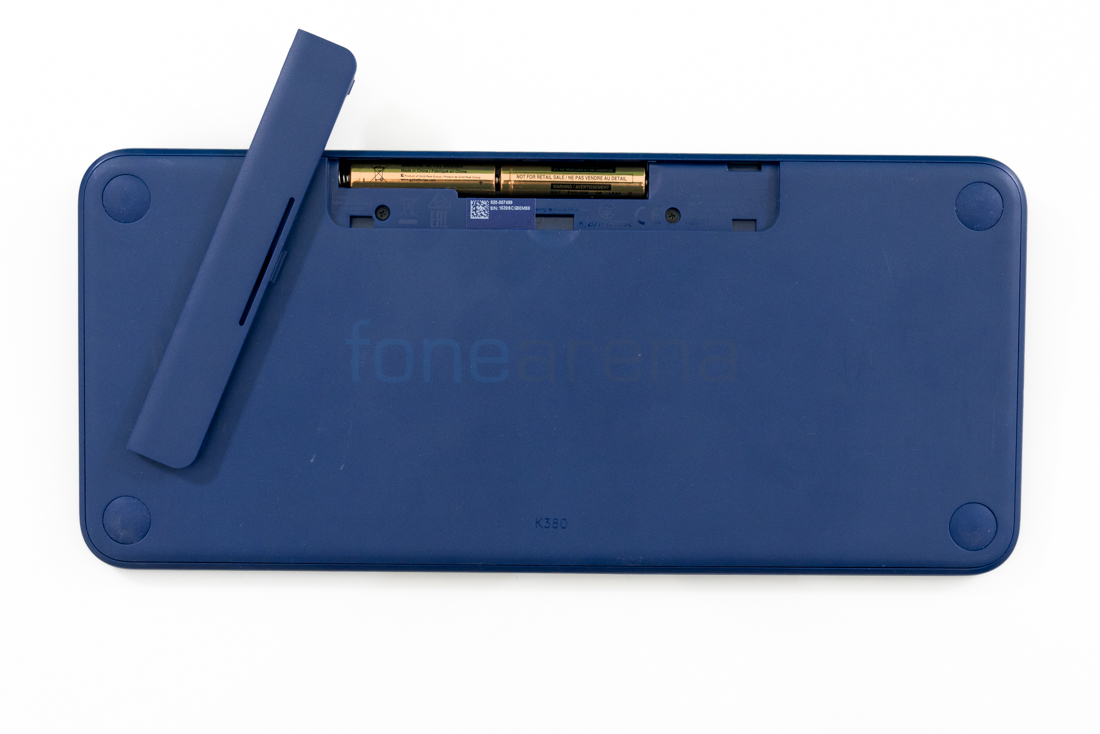 At the back the keyboard has slots for two AAA batteries, which Logitech claims to last for up to 2 years. Keyboard battery life is calculated based on an estimated two million keystrokes per year in an office environment, said the company. However that does depend upon the usage patterns. 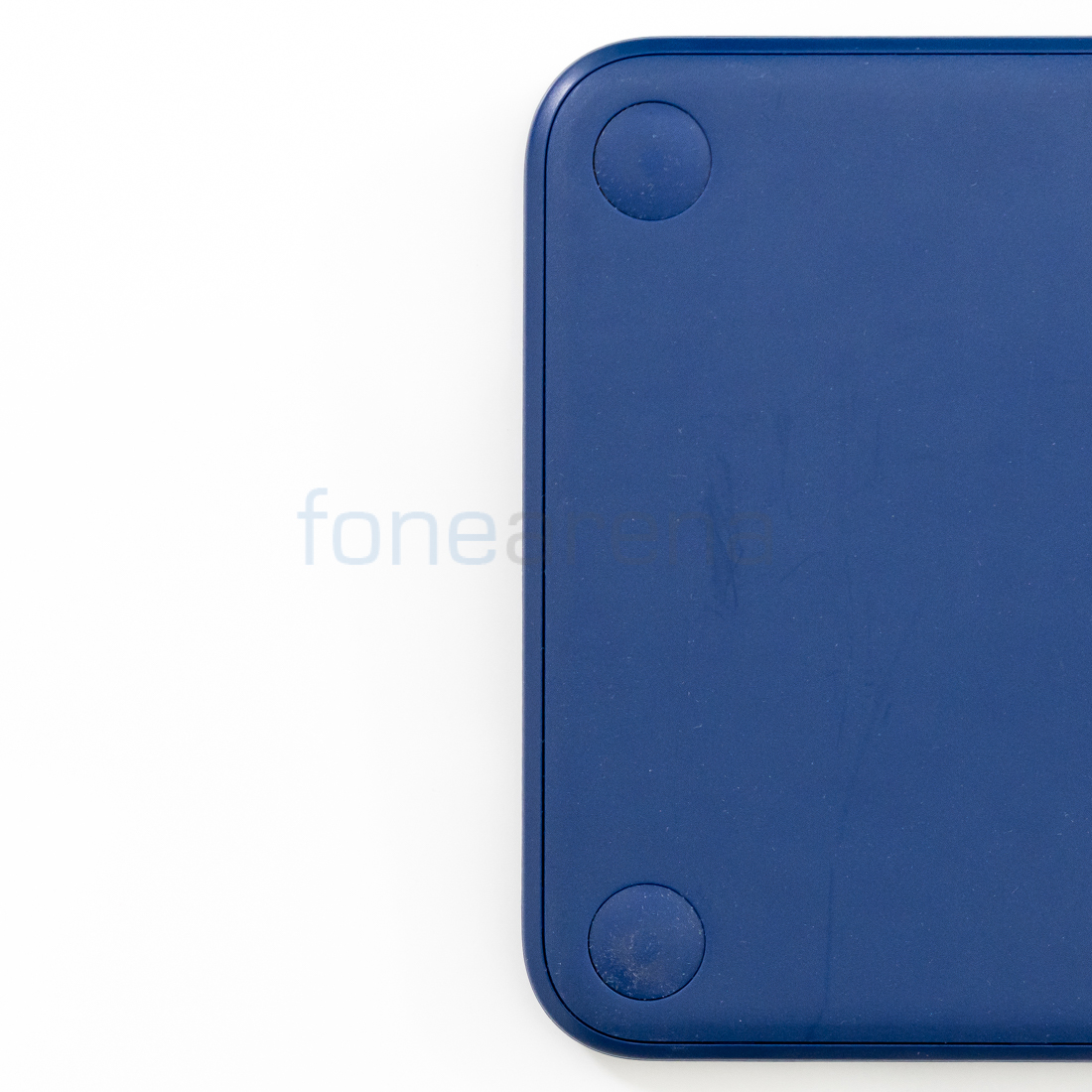 The keyboard has four rubber stubs on each corner that offers a good grip when you place it on a desk. This helps is a good typing experience as the keyboard does not move while typing. 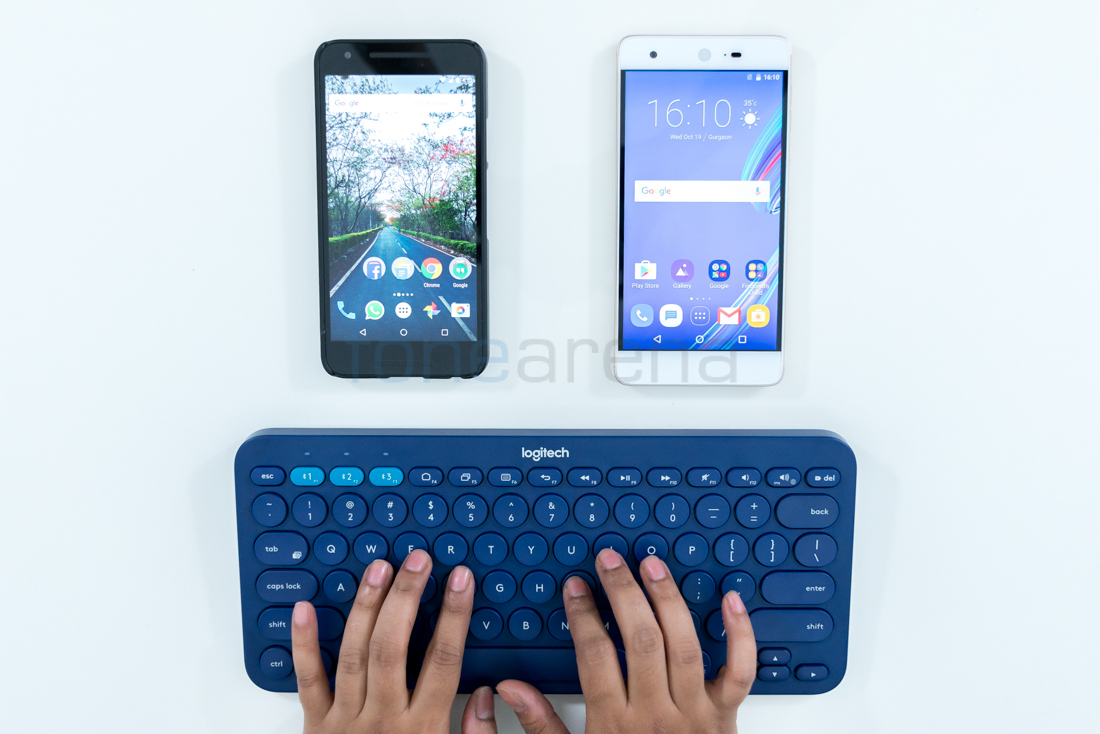 The Logitech K370 offers multi device support meaning, it is compatible with Windows 7, Windows 8, Windows 10 or later, Mac OS 10.10 or later, Chrome OS, Android 3.2 or later, iOS 5 or later and Apple TV 2nd or 3rd generation. The three keys on the top lets you pair the keyboard with three devices via Bluetooth at the same time. In order to pair the keyboard, you will have to simply press and hold down one of the three light blue buttons on the keyboard until its light starts blinking. Following which you can just pair it to your device. You will have to do the same process for other two devices as well.

However, the highlight of the keyboard is that you can easily switch between these devices. The transition or switch from devices is really fast and seamless. I did not experience any lag at the time of reconnecting between different devices which is impressive. I connected the K380 with my Windows 10 laptop and Nexus 5x (Android 7.0) during my testing period. 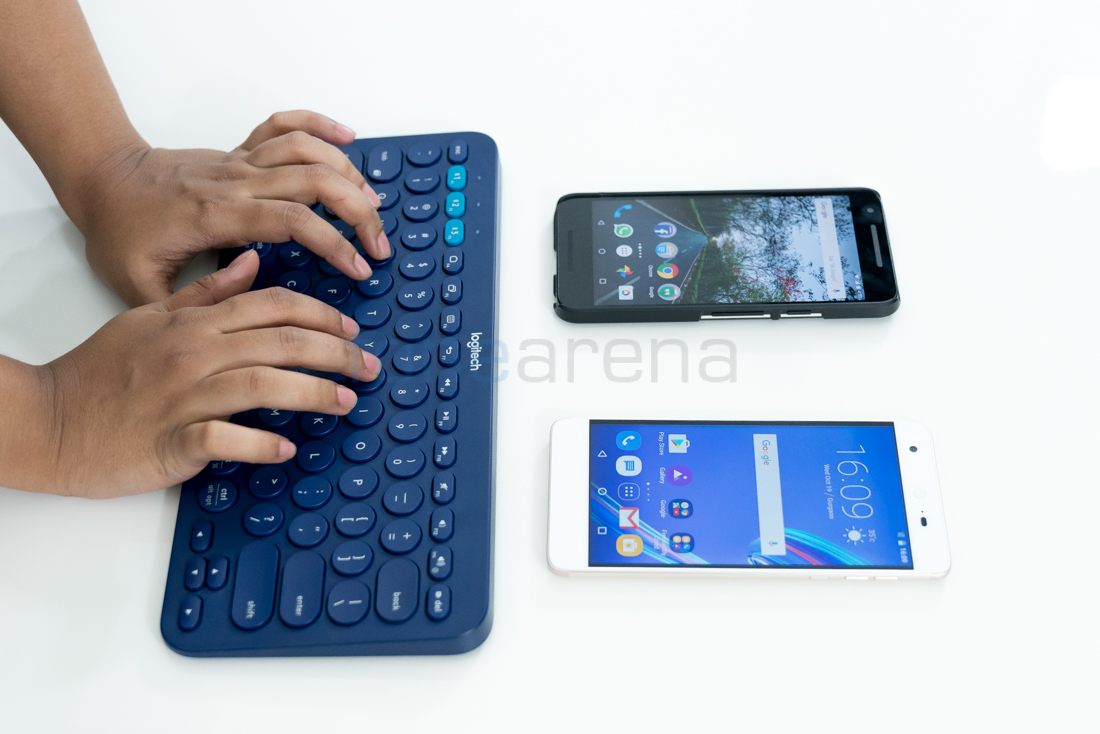 The Logitech K380 is a decent wireless keyboard that has a great design and is portable. The circular keys on the keyboard gives it an extra edge. However, it would have been great if the K380 had backlit keys as you cannot use it in the dark. The keyboard is priced at Rs. 2,795, but it is available for Rs. 16,94 on Amazon.in.

The small and cramped up arrow keys which are used quite frequently could have been bigger and should have had a better placement on the keyboard. In addition, I felt a smartphone holder would have been a nice addition to the keyboard. However, the multi-device support, easy and instant switch between them are the key features of the K380 keyboard. The Logitech K380 is a value for money keyboard that justifies its price tag.