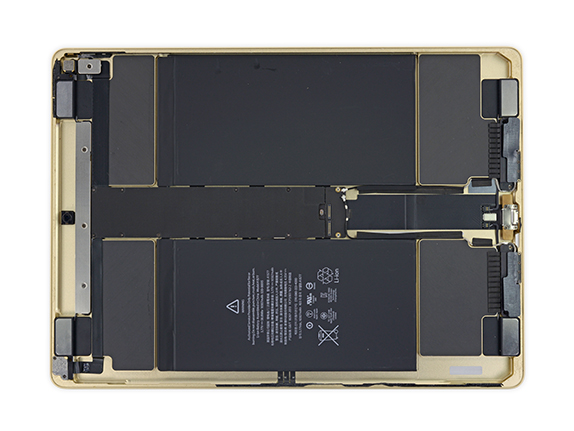 The folks over at iFixit have gotten their hands on the latest tablet from Apple, the iPad Pro and they have done a teardown of the device. The teardown has revealed a few interesting facts including the large 10,307 mAH battery powering the device.

But what is probably more interesting to note is that despite the large battery capacity, Apple could’ve fitted an even larger battery inside had it not been for the four speakers. The four speakers apparently take up around 50% of potential battery space. The iPad Pro has a huge display so the 10,307 will definitely be needed and reviews so far indicate that the battery life isn’t as good as the iPad Air which is a shame considering how they could’ve fitted a bigger battery if not for the four speakers. But considering how the iPad Pro could be a primary source of entertainment for many, some might consider it a worthy tradeoff.

All four speakers in each corner are designed identically since they change their functions depending on the way the device is held. They each have a capped resonance chamber and the speakers that are at the top will provide higher frequencies while the ones at the bottom take care of the lower frequencies. Additionally, the iPad Pro seems to be quite difficult to repair as iFixit has given it a repairability rating of 3/10 which is quite low. The main reason for this is that a lot of the components are held together using adhesive.