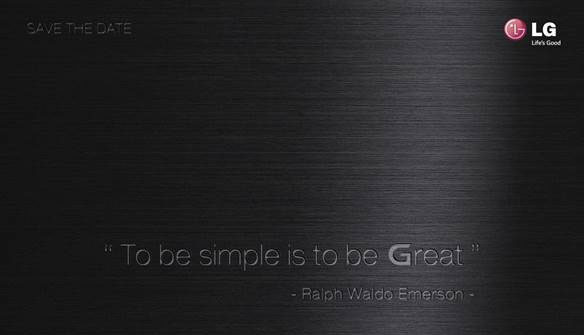 At the earning call LG confirmed that it would launch the LG G3, the company’s latest premium smartphone in the second quarter of this year. The company has started sending out invites for the launch event on May 27th in San Francisco, New York and London simultaneously and the launch event in Seoul, Singapore, and Istanbul is scheduled for May 28th, reports The Verge and the Engadget.

The teaser image reads, “To be simple is to be Great”, that could indicate the phone’s new flat user interface, design and build. The capital G indicates the LG G series devices. Specifications of the LG G3 had leaked several times and a recent leak confirmed rear-mounted buttons and a new sensor on the back.

The LG G3 would also come in Gold colored variant.  The company could also launch the LG G watch at the event.